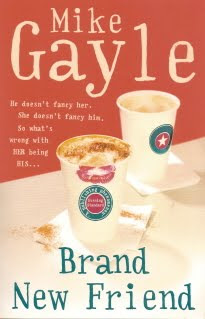 Mike Gayle has been one of my big rediscoveries this year. I found two of his books while I was sorting out my library.

It had been many years since I’d read either of them and when I re-read the first it was like reading it for the first time. I barely put it down.
I have since bought more including these on my “Completed 2010” list (see side bar).

Gayle’s dominant theme is friendship. This also comes across in his non-fiction book The To-Do List. In that book he describes a year of his life in which he compiled a list of 1277 things to do before his next birthday. These ranged from minor repairs around the house to an overseas expedition. Many things on the list related to expressions of love and friendship towards those close to him.

To aid motivation he shared the list with close friends who were given the task of assessing his achievement at the end of the year.

The thing I saw in this book was the similarity between Gayle and his friends and the characters within his fiction books. It seems clear that his fiction is about the kind of people and places he knows well.

Brand New Friend looks at the difficulties of a man trying to build new friendships in a new city.
When the strains of long distance romance make it necessary for Rob to relocate from London to Manchester, it means leaving life long friends behind. He tries a few different ways of meeting and making new friends.
Complications arise when the only suitable candidate he finds is a woman other than his girlfriend. Can men and women be and remain friends without romantic/sexual complications? And if so, how would their spouse/partner view the situation?

Life and Soul of the Party follows a group of friends during a year of tragedy and strained relationships. We see them through a series of parties which bring some of them together and tear others apart. (I assure you the melodrama of that last sentence is mine and does not reflect Mike Gayle’s story).
While Brand New Friend deals with the difficulty of starting new friendships, Life and Soul looks at the way failed relationships can linger and sometimes prevent us from moving on and how even the best and closest of relationships can be compromised by our associations with others, both in the past and in the present.

Gayle’s examination of love and friendship is done with a total absence of earnest navel-gazing or philosophical psychoanalysis. He just tells a story and entertains his readers, giving THIS reader the experience of what could have been – seeing how possible it would have been for me to be one of his characters with their experiences, if only a few things in my life had been different. 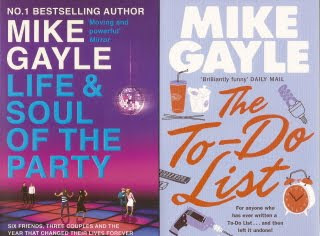 Other Mike Gayle books read this year, which I forgot to mention in previous posts.