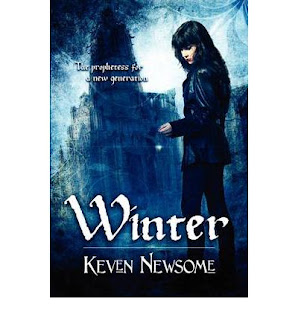 It was only a couple of weeks ago but I've already forgotten how I heard about this book, but something clearly appealed to me because I immediately ordered it.

I wasn't quite so enthusiastic when the book arrived. One of the things dampening my enthusiam was the opening statement in one of the mini-reviews on the first pages: "Christian Goth - way cool concept".

Personally I see very little that is "cool" about that concept. Conforming to the world's obessions, whether "Goth" or any other cultural fad ought to be the antithesis of the Christian life.

And the beginning of the first chapter did nothing to win my confidence, having the feel and imagery of horror fiction written by an enthusiastic but clumsy teenager.

Harsh things to say about a book? Certainly. I'm not sure I've ever written such strongly negative things on this blog...

But then - wait for it... things steadily improve.

Before long I'm caught up in the story, I identify with the main character Winter, the "Christian Goth" mentioned in the previously mentioned review. Early in the story the idea of "judging a book by its cover" receives a little attention, challenging the viewpoint I expressed above regarding the "Christian Goth" issue and I have to concede the right of Winter to her image.
We are told she has only been a Christian for a very short time. We are also introduced to the reasons why she adopted the Goth image in the first place. So, looking past the "way cool" comment I mentioned earlier I have no problem with the character as she has been written and my issue so far is more with  the one who made the "way cool" comment rather than the book's author or his characters. Even the first chapter seemed less clumsy on reflection after I was able to place it in the wider context of the unfolding story.

One of the difficulties I find with Christian fiction is the underlying theology. With some books it is never an issue. They merely portray realistic people in familiar situations trying to deal with everyday life (with a few extreme situations thrown in) in the best way they can according to their level of faith in God. Moving from a place of doubt to a positon of greater trust is a common theme.
Winter is significantly different. It takes us beyond our familar world into territory more associated with the present day genre of "paranormal romance". Winter is struggling with dreams, visions and a recurrring feeling of deja vu. We find she is experiencing the beginnings of a gift of prophecy in which she is made aware of things that are either happening elsewhere or things that are about to happen.

And that is where my biggest concern with the book rises - with the way prophecy is portrayed in practice and purpose. To me the portrayal has more in common with clairvoyance and psychic practices than a biblically sound portayal of a prophetic gift. A clear example is Winter's need to have contact with an object belonging to another character to gain "prophetic" information about that character. That is an occult practice known as psychometry and not a practice of biblical prophets.

Considering the New Testament warns of an increase in false prophets and false prophecy , a non-biblical portrayal of prophecy in a potentially popular work of Christian fiction is worrying. As a work of fiction Winter is entertaining. It captures and keeps the reader’s interest. In my opinion it is a genuine page turner. But the nature of the theological foundation it is built upon makes that readability dangerous if readers accept the books portrayal of biblical prophecy and prophets as legitimate instead of being informed about these things through scripture itself.
Posted by Onesimus at 12:32 PM