A Man of Diverse Obsessions: the evidence in books. 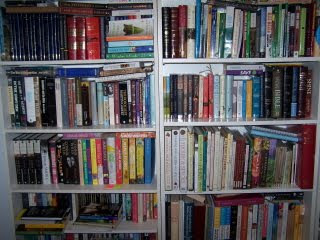 My reading has been very inconsistent this year. I’ve been picking up new books before I’ve finished others so it’s been taking me a long time to finish each one.

My interests have been changeable and few books have really grabbed my interest. Only two or three have made me reluctant to put them down until they've been read.

That’s not to say the other books aren’t worth reading. Some have been interesting even though they lacked what it takes to keep my constant attention They just took longer to read than I intended.

Even now I look at my book cases (or the cupboards in the garage where most of my library is stored) and see things I’d like to start reading NOW. But I resist the temptation because I don’t need the congestion of more semi-read books around the house.

Because of my current reading situation, I haven’t written on this blog for a long time. I’ve wanted to write, but without the inspiration of a specific book I haven’t known what to say.

Then the other day I was thinking about the TYPES of books I own and saw they come under several different categories which may highlight the truth of my blog profile: “A man of diverse obsessions”.

What are these types?

Well, in no particular order, as they come to mind:

I’m not sure how many I own, but I have a good collection of books signed by their authors. Some I’ve obtained in person through attending book signings, or through knowing the author. Others I’ve bought ready signed after a shop has held a book signing. I have also written to authors requesting their signature on a book plate which has later been stuck in the front of a book. The latter approach has also given me a small collection of letters from authors – often handwritten.
Sadly, not all authors have replied to my request, not even using the self addressed, stamped envelope to return the blank bookplates (which aren’t easy to get).

Most of my history books seem to be royal biographies, mostly concentrating on the Tudor era. For some reason I’m fascinated by the period between the Wars of the Roses and the English Civil War which takes history from the origins of the Tudors through to the downfall of the Stuarts.

There are several “How to” books, but my preference is for those detailing other gardener’s experiences in creating a garden. The downside of those books is the gulf between their resources and mine. I don’t have several acres and I don’t have a limitless bank account.

While Gloria has a large collection of cook books, my interest leans more towards food production, food quality and diet. However it is more the social side of these topics that interest me, not scientific detail. What kinds of things influence our diet and how are we influenced by our diet. Why do we eat what we eat? Why do we eat how we eat? What effect do these things have on society?

This is perhaps one of the more frustrating categories in my collection and covers the kind of books that mostly disappoint and frustrate me. So often the term “Christian” is totally inappropriate. Whether non-fiction or fiction, so many have little in common with biblical Christianity.

This category includes many holocaust diaries, histories of the Jewish return to Israel and books about Messianic Judaism. Despite two thousand years of denial by the church, Israel and the Jewish people retain an important place in God’s plan for mankind. It is mainly during the last couple of years that I’ve begun to see that importance.

How could I not be interested in the space race? I grew up during its exciting early years when men travelled into earth orbit and then to the moon, basically “sitting in a tin can” (as I think David Bowie described it).
My collection includes autobiographies (one autographed by a genuine moonwalker), a book of art prints and several histories. Most of them concentrate on the Apollo moon missions and their predecessors. My interest in space travel was so strong that I would have jumped on a space shuttle the day after the Challenger disaster if given the opportunity.

Such a varied category, but the most represented authors in my collection are Tim Winton, Nick Hornby, Jasper Fforde, Mike Gayle.
Jasper Fforde is a recent discovery and I write about him elsewhere on this blog.
Mike Gayle is a recent REdiscovery and he also appears in a few posts somewhere around here. All of these except for Gayle are represented in my autographed book section. I’ll have to do something about adding him to my autographed books too. I corresponded with him through email last year so hopefully getting a signature won’t be too hard.
Jasper Fforde sells autographed copies of his books through his website (see link in side bar).

The title of this section may have some people asking “WHAT?”
These books deal with mysteries and the unknown, the unusual and strange. The name relates to Charles Fort, a writer and researcher who took an interest in the strange stories sometimes appearing in newspapers.
Along with the Christian section, this one provides some of the most frustrating titles in my collection. I have come across few reliable and readable books dealing with these “Fortean” topics. Most are highly questionable accounts based on dodgy evidence written in a manipulative style. Many of these books had me sucked in for years, until my gullibility was slowly eroded away by a few excellent books by Jim Schnabel, David Clarke and Andy Roberts, and most recently Steve Dewey and John Ries.

And at that point I’ll bring this entry to a close without saying too much about my books on birds and birdwatching, or those about wine, or the children’s titles, books about Derbyshire (where I spent my childhood), or well represented, individual categories of fiction such as Victorian classic, Science Fiction, Fantasy, Irish literature…