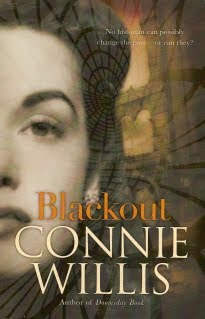 What more desirable tool could historians dream of than the ability to travel through time to observe people and events for themselves instead of relying on texts and artefacts? Connie Willis has created a world in which this tool is a reality and is being used by Oxford based historians.
She introduced this concept in her Hugo and Nebula award winning novel Doomsday Book, a merging of science fiction with the historical novel. She has now returned to the ideas of that earlier book with a two volume story that starts with the recently released Blackout and will conclude with All Clear, due later in the year.

In Blackout historians are studying various aspects of life in the Second World War. One is studying evacuees, children sent away from areas of danger in the cities to the relative safety of the country. Another is focusing on the life of the “shop girl” in London during the Blitz and a third has been sent to cover the heroes of Dunkirk who set out in small boats to rescue British troops trapped on the beaches of France.
All of these projects should run reasonably smoothly. It is assumed that the laws of Time Travel prevent them from having significant impact on the events they observe, but it’s not long before that assumption is challenged.

One of the difficult things in writing about a book like this, is avoiding giving away any key plot details that will spoil the experience for anyone who has not read the book so I'll avoid specific references to events in the story. It was the desire to find out what happens next that made this book such an addictive read as I got more involved with the characters and the challenges they face.

At first I struggled with the story but as I gained more familiarity with the characters and their situations, the book became one that I was desperate to return to whenever my reading was interrupted by the unwelcome intrusion of real life. Willis uses a common technique of cutting from one set of characters to another at each chapter break, often leaving each section with a “cliff-hanger” making the reader more eager to read on to find out how it is resolved.

As mentioned Blackout is only the first part of the story, I knew this before I started the book, but I was still disappointed when I came to the end without the satisfaction of a conclusion. Against expectation the book didn’t end dramatically, it ended with a whimper. I feel it would have been much stronger had it ended a chapter or two earlier.

Early in the book I found myself being pulled out of the story a few times by little irregularities. I’m sure a lot of this comes down to personal idiosyncrasies and probably other readers wouldn’t think twice about them and this may be why I struggled with it a little at first.
One thing that irritated was the occasional lapse into inappropriate Americanisms – for example, cars were often referred to as “automobiles”, a term that I’m sure was not used by the British in war time. Having lived in England until the age of 13, and having parents who lived through the period detailed in the book, little things like this became minor irritations.
Admittedly Willis is an American author and her main readership would be American – but to a non-American, former English reader, such lapses broke the illusion of the reality being portrayed.

Another grievance I had with the early part of the book relates to something I’ve seen described as “build up and pay off”. This is a technique in which significant plot points are built upon foundations that have been set up in advance. For example, if a character saves himself by shooting an enemy, it is necessary to establish the fact that a gun is available for him to use before it comes into play.
In the case of Blackout, a significant part of the plot involves “time lag”, tiredness similar to jetlag which can cause intense sleepiness. The first time I recall this happening in the book was when the experience completely changed a character’s situation. It was mentioned again a little later in relation to a second character where the experience had very little impact.
Structurally I think the story would have been significantly strengthened if these two experiences had been reversed, allowing the minor situation to prepare the reader for the case when time lag played an important part in the first character’s experience.

By making these critical observations I don’t want to diminish the fact that Blackout is a very enjoyable book. The characters are well portrayed and their wartime experiences are believably vivid. I am very keenly waiting for the release of All Clear so that I can re-enter their world and share their experiences again.
In the mean time I’ve been inspired to find out more about war time Britain and I am realising how little my generation (and those following) can conceive of the horrific realities of a war only 15 years before I was born.
Today I checked the casualty figures of American troops in Iraq. In seven years almost four and a half thousand of them have been killed. While these figures are certainly tragic, such casualty figures AND HIGHER were common on a DAILY basis during WWII – many of them being civilians.

I acknowledge and thank Allen & Unwin, the Australian publishers of this book, for providing me with a review copy.
Posted by Onesimus at 11:48 AM 2 comments: 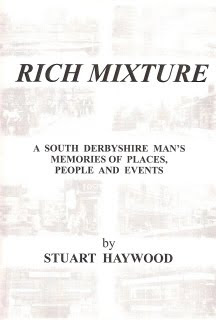 Stuart Haywood’s book has a nostalgic appeal. I spent my childhood in the area he describes and I lived less than a kilometre from his childhood home a couple of decades later.
I was familiar with most of the places he describes, either though my own experience or through stories my parents have shared over the years.

I left South Derbyshire when my family moved to Australia and have never lost my interest in that area, although I am the only one of my family not to return for a holiday. From what I have heard, the place I remember has changed significantly and I probably wouldn’t recognise much of it.

Rich Mixture describes parts of the region as I remember it, helping me to recall details I had forgotten. Those moments of familiarity and being able to picture the places being described were the source of most of the pleasure I found in this book. And it made me think about the possibility of recording my own memories of childhood.

Stuart Haywood has an article about his wartime childhood here:
http://www.bygonederbyshire.co.uk/stories/Stuart-s-wartime-childhood-Newhall/article-1796888-detail/article.html
Posted by Onesimus at 11:44 AM 1 comment: