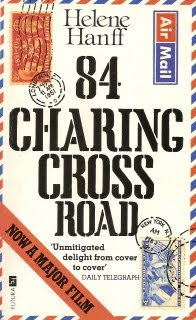 
I found these two separate titles in my copy of 84 Charing Cross Road. They were originally published individually with Duchess being a sequel to the other, better known book.

My paperback is a film tie-in edition published at the time of the Anne Bancroft, Anthony Hopkins film. It was another of those books that I’ve had for years (probably over 20!) but never got around to reading. I bought it because I enjoyed the film so much and I’m not sure why I neglected it for so long.

The first section, on which the film was based, is a collection of letters written over many years between Hanff and the staff of Marks & Co., primarily their chief buyer Frank Doel.
Having seen the film again only a few weeks earlier, I could see how faithful the majority of the film was to this collection of letters. As such, the book became more of a written reminder of the film than a unique reading experience.
I wonder how different it would have been had I read the book first.

The Duchess of Bloomsbury Street was a surprise. Having neglected 84 Charing Cross Road for so long, I wasn’t aware that the sequel was there, and it was this part that I enjoyed most. It continued Hanff’s story as she finally realised her dream to visit London, thanks to the success of her earlier work.

I found Duchess a pleasure to read, mainly because of the genuine joy expressed by Hanff in her experience of London. How different it is to so many other travel books – where writers have a seemingly obligatory cynicism (at worst) or a (at best) a mildly mocking tone directed towards the places they see and the people they meet.

While the events in Duchess weren’t covered by the movie, the film continued to colour my reading of the book. I couldn’t help picturing Ann Bancroft as Helene Hannf, and when she finally met Frank Doel’s widow Nora, I kept seeing Judy Dench who played her.
Posted by Onesimus at 12:05 PM